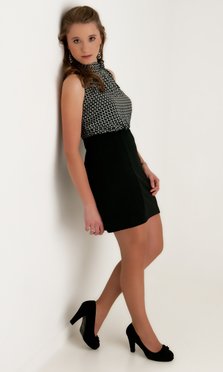 "Stephanie Proot is an exceptional musician with a powerful pianistic mastery. Moreover, she transcends mere virtuosity and is able to sweep away the audience into the most enchanting musical atmospheres. Her colorful interpretations display a unique symbiosis of natural expressiveness and well-considered rhetoric."

Starting to play the piano at the age of 6, Stephanie's great musical talent and artistic potential was immediately clear. She graduated from the Antwerp Conservatory piano class of Levente Kende and continued her education at the Ecole Normale Alfred Cortot in Paris with Ramzi Yassa and at the Chapelle Musicale Reine Elisabeth in Brussels with Abdel Rachman El Bacha. Finally, she perfected herself at the Frankfurter Hochschule für Darstellende Kunst und Musik with Lev Natochenny.

While Stephanie feels like a fish in water as a soloist performer, she takes particular pleasure in communicating with other musicians. She has worked together with renowned conductors such as Eric Lederhandler, Ivo Venkov, Joanna Carneiro, Alain Paris, Mladen Tarbuk, Theodor Guschlbauer and Augustin Dumay in concertos of Beethoven, Chopin, Liszt, Mozart, Rachmaninov and Ravel. In 2012, Stephanie decided to give shape to her love for playing chamber music and established the Ensembl'Arenski with Claire and Aurore Dassesse.

In 2012 Stephanie recorded her first CD containing four Beethoven sonates.  In 2016 she released her second CD with  Liszt and Schubert. In  october 2017 the debut-album of Ensembl'Arenski was released.